When Alex Proyas wrote the short film Mask of the Evil Apparition, he did not set out to evoke the tone of his 1998 sci-fi thriller Dark City, which was set in a nightmarish world with no sun.

But after filming for four days last week in Heretic Foundation, his new studio in Sydney’s inner west, the parallels are inescapable.

Bonnie Ferguson stars as Olivia, a young woman lost in a nocturnal, dreamlike city, with Dean Kyrwood as twin psychic brothers who try to help her find her way home as she is pursued by a shadowy cult known as The Mysterious Ones.

Alex King is Sandra, a young woman with a passion for disguise and mind games, and Goran D. Kleut portrays a roomful of identical characters.

Proyas, who is shooting the final scenes today, tells IF: “The short has evolved into something of a Dark City spin-off, which took me by surprise as I didn’t intend it to be one.

“When Liz Palmer, my brilliant costume designer on Dark City and nearly everything I’ve done, started dressing our gorgeous cast in these hybrid neo-1940s fashions, that’s when this notion began to present itself.

“Filmmakers are often doomed to repeat themselves; the same concerns and obsessions keep reappearing in our work.” 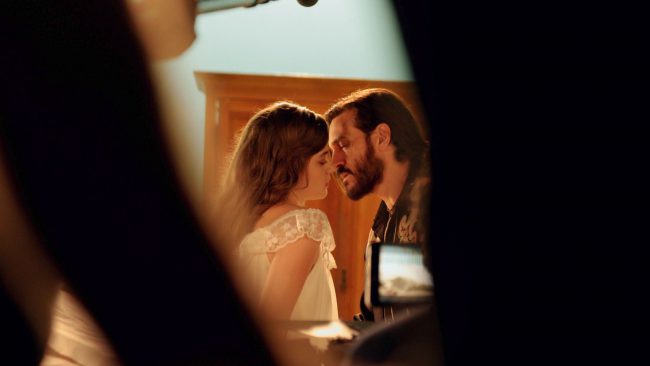 Proyas hired Lunar Pictures’ Jim Robison to produce the short with him on the recommendation of both Ferguson and Kyrwood, who appear in Moon Rock for Monday, a coming-of-age road movie from first-time writer-director Kurt Martin, which Robison produced.

The filmmaker shot all scenes against a green screen without any pre-built or photographed environments, which will be added later in a combination of photography and 3D.

“This allowed us to shoot very fast and to achieve a quite polished finished product set in a stylised ‘German-Expressionist’ city,” he says.

“All this was done with a crew of fewer than 20 including post. Anything I’ve done with this level of complexity would have required many multiples of that number. This is about testing the studio pipeline as a way to integrate various technologies and streamlining the production process. So far it seems to be working.

“This short is R&D for the technology as well as the economics of eventually producing features in this way. So by the time it’s done we’ll better understand the much streamlined resources it takes to shoot a feature in 6-8 weeks and finish in a fraction of the time it takes traditionally.”

The 15 minute short will premiere on his Mystery Clock YouTube channel and screen at film festivals.