Filmmaker and photographer Cloudy Rhodes is carving out quite a career, helped by mentors Justin Kurzel and Samantha Lang.

Rhodes, who identifies as non-binary, was born in Bondi to hippie parents who named her after the sky, and grew up in Sydney’s northern beaches.

(For the sake of consistency this article will refer to Cloudy as she, although she often uses the pronouns them and they).

After leaving school she pursued photography and pro-surfing. The turning point came when Justin Kurzel saw some of her photographs and encouraged her to become a filmmaker.

A recurring theme in her work is queer narratives which are uplifting. “I want to focus on telling positive stories to queer kids and stories that give people hope,” she tells IF.

Currently Rhodes is writing and will direct one of the segments of MASC, a seven-part anthology which will give female and non-binary perspectives on contemporary masculinity, with development funding from Screen Australia.

The co-collaborators are Madeleine Gottlieb and Laura Nagy, who came up with the concept, Imogen McCluskey, Renée Marie Petropoulos, Hyun Lee and Shari Sebbens.

Originally the plan was to make a six-parter but Gottlieb and Nagy asked Cloudy to come on board because they wanted a non-binary viewpoint.

Rhodes’ segment will centre on two brothers, one who is 15, the other aged seven or eight, who is trans.

“It’s a beautiful story about brotherhood,” Cloudy says. “The younger brother still presents as a tomboy and no one really sees him as he really is, except his brother, who acknowledges him as his brother rather than a sister.”

Casting could be challenging for the younger character so the filmmaker plans to make a casting call for boys and girls and see who is unearthed.

Rhodes and Gottlieb had met briefly at the Sydney Film Festival last year where their short films screened. Rhodes’ Deluge was scripted by Llewellyn Michael Bates, who has a disability, and produced by Dollhouse Pictures’ Jessica Carrera.

Funded through Create NSW’s Screenability strand which priorities minority stories on screen, the film starred Sophie Lowe, Skye Wansey and Kayle Donaldson as spirited women who rise up against their cult-like community and expose abuse. 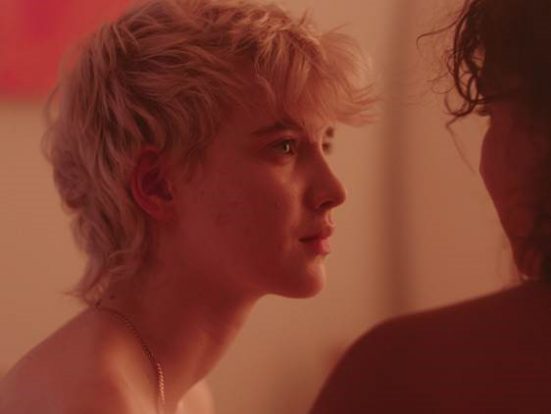 Morgan Davies in ‘Beautiful They.’

Her first short, Lo Loves You, a tale of teen infatuation, was acquired by Arcadia Film and screened around Australia with US director Kerem Sanga’s lesbian romance First Girl I Loved.

Next came Sink, a short written by Roger Joyce which starred Tessa de Josselin as a young girl whose lover killed herself and Susie Porter as her mother.

Lang mentored Rhodes on Beautiful They, a short produced by Ella Millard which has just locked. A queer surf romance, it stars Morgan Davies and Sariah Saibu as Blue and Violet, who enjoy a morning toke that leads to the ocean where connection stirs. Arcadia co-funded and will distribute, initially via festivals followed by online platforms.

“Cloudy is a distinctive and emerging voice in the screen landscape. I thoroughly enjoyed working with her as mentor/EP,” Lang, now head of development at I Am That, a joint venture between Garth Davis and See-Saw Films, tells IF.

“I‘d worked with Ella Millard before and when I met Cloudy I thought that she and Ella would make a great creative team. It’s a collaboration that seems to have yielded results. That, as well as the sensitive casting and wonderful performance from Morgan Davies.”

Her ambition is to step up to feature films which explore gender, queerness and youth, but equally she is open to making commercial films that are outside that world.