‘Island of the Hungry Ghosts’.

Island of the Hungry Ghosts, a hybrid documentary-feature which portrays the parallel worlds of migration on Christmas Island, is set for its Australian premiere at the Melbourne International Film Festival this August.

The film made its debut in April at the Tribeca Film Festival where it won the award for Best Documentary Feature. The very same week the film won the Human Rights Award at Switzerland’s Visions du Réel and has gone to pick up Best Film at the Valetta Film Festival and a Jury mention at Edinburgh Film Festival.

The film’s portrayal of the conflicts facing a trauma counselor working with asylum seekers is also capturing the attention of film critics and audiences alike.

It’s a dream-like debut for a low-budget film. For first-time feature filmmaker Gabrielle Brady, the most remarkable achievement was just finishing the four-year project that saw her commute from the Indian Ocean to a caravan in Cologne, Germany.

“It was not an ideal way of planning the pre-production from a caravan park in Germany, but at the time it was the only way I could afford to do the film – so we just made it work how we could,” says the director, writer and producer.

Brady’s journey started in Mongolia while she was working on a television program for teenagers. It was there that she struck up a friendship with Australian social worker Poh Lee Lin. Two years later while working in Indonesia, Brady visited Poh who was working on Christmas Island. She took a short flight 350 kilometres south of Java to the Australian territory best known for its annual crab migration.

Brady says she was amazed by the island’s idyllic beauty and at the same time deeply moved by what Poh Lin was experiencing. Her work as a trauma counsellor for asylum seekers at the high-security immigration detention centre was incredibly confronting.

“Poh Lin was beginning to witness the changes taking place on the island. There was a time where families stayed together in the centres and were able to leave for day trips to see the island. After some months, they could leave for the mainland to begin new lives.

“But over the years, families were increasingly separated and taken to different centres. Eventually no one was allowed to leave the detention centre.”

Poh Lin found it increasingly difficult to try to counsel people with no guarantee of settlement and a fear of being returned to the dangerous countries they had fled.

For Brady, the despair hidden away in the depths of the jungle compelled her to write. 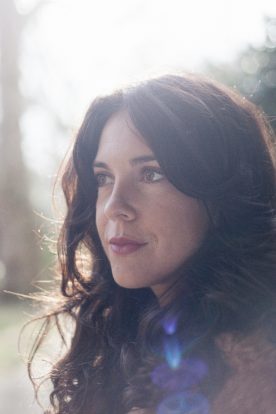 “The stark contrast of the beauty I had experienced on the island and then this kind of horror I saw in front of me really marked me, along with the atmosphere and strangeness of the island. This planted a seed for the beginnings of the film idea.”

The thousands of wandering crabs became an eerie back-drop and a metaphor for the chaotic journeys of those seeking refuge. Brady also explores the mysteries of island itself; islanders hold rituals to appease ‘the hungry ghosts’ – restless souls they believe wander the island.

Poh Lin became not just a character in the film but also a collaborator. Intimate therapy sessions with asylum seekers make up some of the most revealing and confronting moments in the film.

Brady has followed an unconventional path to making her first film. After studying theatre and journalism, she took a producing job in commercial television. But having grown up in a small country town in NSW, she craved adventure and travel. She resigned her well-paid job and set off to Ulaanbaatar, the wild and sprawling capital city of Mongolia, to work in its still fledgling television industry.

“I remember friends thinking it was a crazy decision to up and leave Sydney like I did. But it turned out to be the best decision I could ever make.”

Brady went on to study filmmaking in Cuba at the International School of Cinema, andlived on a remote farm outside of Havana for almost three years. It was an intensive and emotional draining time, Brady says, but took her to great depths in understanding how she wanted to approach filmmaking.

“So much of what gets discussed with making films is around the technical elements that it takes to make a film. But there is that huge part of making a film that is about the internal process you undergo as a filmmaker. How and why do you want to make the films you make. Studying in Cuba was a very traditional approach to filmmaking, very much focused on author-driven films. We had a cinema history class every day for the first year. And living in Cuba at that time, I had no phone, and only had access to a very slow email about once every couple of months, so there were no technical distractions. This was an incredibly immersive and dedicated way to study the art of cinema – those were the good sides of it anyway.”

Brady developed her Christmas Island film between Indonesia, a caravan in Cologne and Berlin, where she is now based part-time.

“I had to really live off the bare minimum for a big chunk of making the film. To do this, I lived for around a year in a caravan with my partner Florian. So yeah, there are always big challenges to getting the first film up. As Micheal [Latham, the film’s DOP] called it, the first film is always the ‘credit card’ film. Filmmakers just paying [for] it themselves – and hoping it goes well.”

The film eventually was made as a co-production between Australia, the UK and Germany, although is majority funded by Germany and the UK.

Island of the Hungry Ghosts aims to confront audiences with the pain and feelings of futility experienced by refugees. Brady hopes the film will allow for another perspective on their plight.

“Shifting the gaze is one of the most important things an artist or filmmaker can do in any part of society. So seeing this film, with the intimacy and closeness we have to these people and the honesty of their stories, will hopefully plant a seed for people to reconsider what they think they already know about Christmas Island, and the system of indefinitely detaining people.

“There are people I met years ago on Christmas Island, who are still being detained in one of Australia’s three offshore immigration detention centres – with no way of knowing when, or if, they will ever be released.”

‘Island of the Hungry Ghosts’ screens at MIFF August 3 and 7. Tickets here.