When Rowan Chapman first set out to create a ‘career longevity’ guide for aspiring and young actors, full of survival tactics to help them cope with the pressures of the industry, it wasn’t initially clear that what he was crafting would end up in large part as a mental health and wellbeing resource.

Launched this week, The Long Haul is a free website with advice that spans graduation from drama school, finding an agent, working with casting directors and maintaining professional relationships. But further, it also offers advice on cultivating a healthy attitude to creativity, dealing with rejection, nutrition, fitness, sleep, body image issues, finances, self doubt and career obsession, and knowing when you aren’t okay and need to reach out for help.

Its content and research was generated and vetted over four years by 150 industry professionals, including actors, casting directors, producers, directors and distributors, as well as allied health professionals and mental health specialists across Australia and overseas.

Chapman, who has appeared in projects such as Peter Rabbit 2, Les Norton and A Place To Call Home, decided to create the resource after being awarded the Jennifer Blocksidge Memorial Scholarship – designed to put towards a project to benefit the wider acting community – upon graduating from QUT’s Acting Program in 2015.

As a new grad, trepidatious about entering the industry, Chapman wondered what was out there to guide new actors that was “specific to Australia, for people coming out of third year like me and entering the big, bad biz for the first time.” 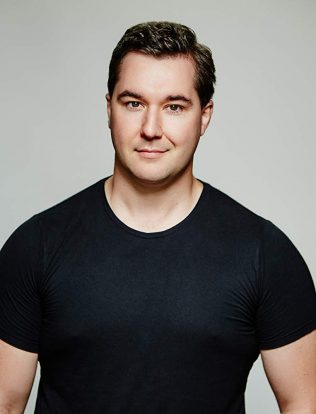 He hit the library, but almost everything he found was LA or London-centric.

Initially, he envisaged then developing a ‘how to’ guide or manual to the industry for all actors across Australia. “Then I realised very quickly ‘Wow, Chappy, that’s a bit presumptuous. You, a graduate, telling people who’ve been doing this hard yakka for 15+ years, that have learnt everything you’re going to tell them anyway through the school of hard knocks? That’s a bit presumptous’,” Chapman tells IF.

“So it got geared at first towards the more vulnerable among us. And then because it was geared towards the more vulnerable among us – the new grads, the people coming into the industry for the first time – we realised that there was a big wellness element to this… this is a wellness and mental health resource. That’s what it is. I can say that it’s a treatise on the industry or something, but at the end of the day, that’s what it turned into.”

For Chapman, the decision to focus on mental health and to get this resource out there was also a personal one. After his drama school showcase, Chapman had a nervous breakdown for a month. It is something he hadn’t spoken about publicly until the launch of this resource, and he hopes the the work can stop anyone from feeling in his position.

“I couldn’t feed myself. I could read, write, couldn’t audition. I had to have someone hold my hand to go outside. I was, for all intents and purposes, a vegetable. Following that, they graduated me to generalised anxiety disorder and severe depression, which I still work with to this day. Everyone tends to know me as bouncy Chappy, happy Chappy, sometimes irrepressible Chappy. The guy that just keeps bubbling along. No one knows this about me.

“The reason why I kept quiet so long until know is because of some bloody stupid reason it would make me less of an actor and I wouldn’t get work. What a stupid idea that was… everyone’s got some problem they’re dealing with in this industry.”

In this way, Chapman has also been enthused to see mental health and wellbeing touched on in Ben Steel’s recent documentary The Show Must Go On, as well as the MEAA Equity Wellness Challenge and he hopes this resource can add to the conversation and the breaking down of stigma.