Films rated PG, including Australian releases, are taking a greater share of the domestic theatrical market this year where M-rated titles are declining. The MA15+ category remains stable overall, but minuscule for local films.

And in a possible concern for distributors and exhibitors, frequent and once-a-month moviegoers are buying fewer tickets – but infrequent patrons are going more often.

These are among the trends revealed in a presentation by Motion Picture Distributors Association of Australia general manager Lori Flekser at last week’s 2020 Vision | Feature Film Forum organised by Film Victoria.

Through November 20 the 48 Australian films and documentaries in release this year (including a few holdovers) grossed $49.5 million. That equates to 8 per cent of the 595 titles released and just 5 per cent of the nationwide receipts of $920.6 million.

Illustrating the increasingly crowded theatrical market, 651 films will have been released in cinemas by December 31, an average of 12.5 per week, spiking up from 609 in 2016.

Titles rated PG accounted for 19 per cent of the total but 23 per cent of the BO. The nine Aussie films in that category generated 85 per cent of the grosses for local titles, dominated by Lion which minted $29.5 million, and Red Dog: True Blue, which opened on Boxing Day 2016 but made most of its money this year.

“It’s a no brainer that movies which have the chance to reach the widest number of people stand to make the most money,” Flekser tells IF.

She suggested Australian filmmakers whose films are targeted primarily at teenagers should aim for an M so teens can attend without a parent of guardian.

She cited the recent case of a commercial film which went from potentially being classified PG to M purely because of one swear word. 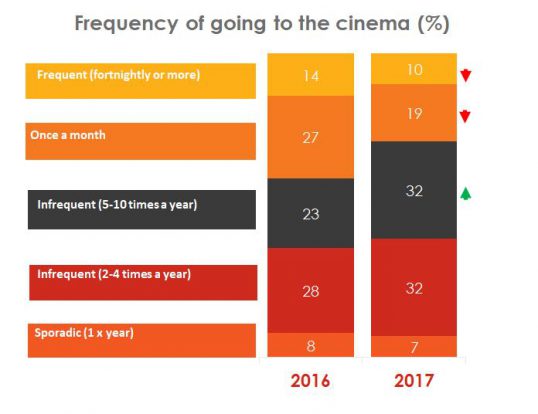 Understandably there is a strong correlation between the number of screens and takings for Australian films and docs. Of the top 10 titles Jen Peedom’s Mountain was the narrowest release on 36 screens but its $2 million gross was boosted by 13 live performances.

Research commissioned by the MPDAA and carried out by SARA in June showed patrons who go to the cinema every two weeks or more were just 10 per cent of the moviegoing universe, down from 14 per cent a year earlier.

SARA’s study found comedy action/adventure and mystery/thrillers remain as the most popular genres followed by films based on a true story, sci-fi/fantasy and “feel good.” At the bottom of the preferences are foreign/international and arthouse.

While there would be some blurring between genres, horror ranked ahead of documentary, kids/family, tearjerkers and films which “tackle big issues.”

Independent cinemas constitute about 25 per cent of the nation’s screens but, perhaps surprisingly, consistently deliver 43 per cent of receipts, in part testament to the success of the Palace and Dendy circuits.