Roy Joseph always wanted to be an actor but he was so lacking in self-confidence he did an entertainment management course at the JMC Academy with a view to working in the music industry.

His self-belief grew after he completed a NIDA Open Actors Studio program in Melbourne so he applied to enrol at NIDA. Not once, but three times, without success. He also applied to WAAPA and was accepted after his second try.

Before he graduated from WAAPA at the end of 2017 he was introduced to casting director Nathan Lloyd by a fellow student. That led to his first breakthrough: winning a regular role as Vijay Kapoor, CEO of Doppelganger Designs, in the Gristmill/ ABC comedy Back in Very Small Business.

Lloyd recommended to Five Bedrooms creators Michael Lucas and Christine Bartlett they hire Joseph for the role of Harry, the gay surgeon who is hiding his sexuality from his Indian mother, in Hoodlum Entertainment’s Network 10 comedy drama.

There was one problem: As written, the character was almost 40, which would have been a stretch for the 26-year-old who was born in Israel – his dad is Indian and his mother is Iraqi – and resettled in Perth when he was six months old. His parents are Jewish and so is he, so his upbringing was far from typical for an Indian family.

So Lucas, Bartlett and co-writer Mithila Gupta changed the character’s age to 30. “When I auditioned I knew the role was perfect for me,” he tells IF. “The way it was written, I knew I could bring out the truth in him.” 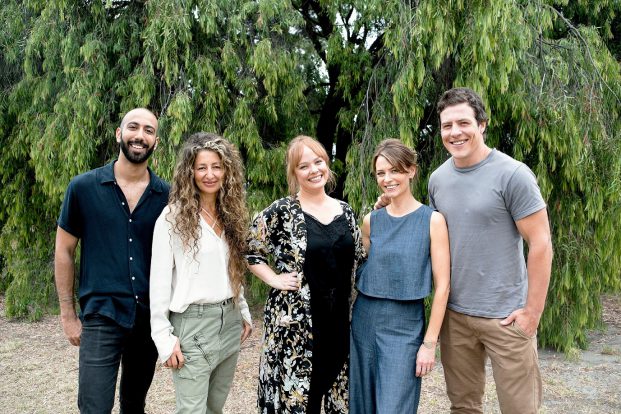 Kat Stewart plays Harry’s best friend Liz, a once high-flying lawyer who fell from grace. Marvelling at her performance, he says: “Kat has great comic timing and brings so much heart to her work. Watching her has made me a better actor.”

The three directors on the show each bring different but complementary approaches, he says. Set-up director Peter Templeman responds to performances as they unfold each day. Corrie Chen prepares each scene meticulously on her iPad. Fiona Banks is strong-minded and a blend of both styles.

Banks directed the episode in which Harry tried to come out to his mother, noting, “She really pushed me.”

The show is rating well and the producers and the cast are optimistic it will be renewed. The June 12 episode drew 768,000 viewers over seven days in the five mainland capitals – 498,000 overnight and 270,000 in encore and catch-up viewing, a rise of 54 per cent.

In contrast to the lack of confidence which once held him back, he now says, “I’m loving this job. I’m auditioning here and there and I’ve love to do some theatre. But I’m in no rush.”

The actor is pleased to see much richer diversity on Australian screens, observing: “It’s a great time, and it’s about time.”