Playing a Nazi-hunting nun opposite Al Pacino in the Amazon Prime series Hunters in New York, Kate Mulvany occasionally had to pinch herself.

In the 1970s-set series based on real events she plays Sister Harriet, a kick-ass nun and former MI6 spy, whom she laughingly refers to as “James Bond in a habit.”

The 10-part series created by David Weil and produced by Jordan Peele’s Monkeypaw Productions and Sonar Entertainment ended on what she describes as a jaw-dropping moment after rolling waves of revelations.

But for the pandemic, a decision on a renewal was expected earlier this year and Mulvany and her husband Hamish Michael had planned to move back to New York this month.

That, of course, is on hold, but she is optimistic of a second season, telling IF: “We had beautiful responses and the series ends on such unexpected note I can’t imagine why people would not want to see more.”

Asked what she learned about Pacino, she says: “He brings theatre to a room without even meaning to. He is a team player who doesn’t walk in as a star.

“He wants to work with everyone, the director, the writer, Sister Harriet, the DOP, to discuss each scene and work out what we mean to each other. He is such a professional but so much fun, cheeky, mischievious and generous.” 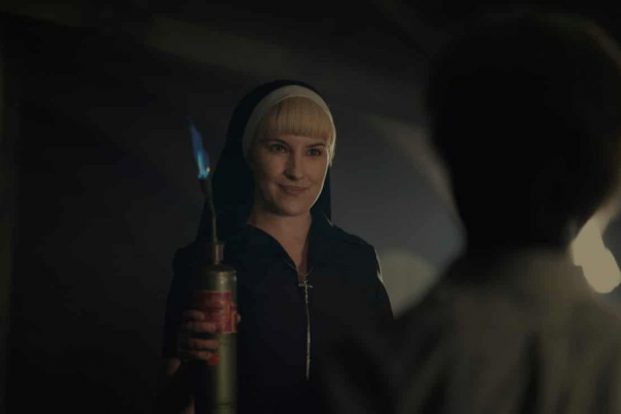 In a live streamed conversation with NIDA Director of Creative Practices David Berthold last week, the actor/playwright/screenwriter spoke candidly about how adapting Shakespeare’s Richard 3, in which she played the title role, changed her perception of her disability.

She has a spinal curvature, a legacy of being treated for cancer when she was a child. Until she played the king, whose skeletal bones discovered in 2013 revealed a similar spinal structure to hers, she says she thought she had a deformity and was abnormal.

“That experience made me love my body and its capabilities,” she tells IF. “It was something I could be very honest about and not have to hide.”

Kate co-wrote the Foxtel/Lingo Pictures’ series Upright with the creator Chris Taylor, star Tim Minchin and Leon Ford, with Niki Aken as script producer. She suggested Milly Alcock as Meg, the teenage daughter of Minchin’s character, after she played her daughter in Fighting Season. She says she’d work with Taylor, her former Chaser colleague, again in a “heartbeat.”

One passion project she has long been developing is The Seed, a screen adaptation of her play set on one day in the 1990s when three generations of the same family gather to celebrate their birthdays. Rose Maloney’s father Danny is a Vietnam veteran and her grandfather Brian is ex-IRA.

Collaborating with producer Nicole O’Donohue, she originally envisioned turning the play into a feature film but now thinks it’s more suited to a limited TV series.

“There’s something about the extent of the issue of the legacy of war and how it can strangulate future generations, I felt I needed more time and space to properly tell that story,” she says.